Midlands live band of the year?

We have recently felt we had done plenty enough gigs within the midlands area to now begin gigging elsewhere to broaden our fan base. This thought could not have been more solidified by recent news that we have been nominated for the 'midlands live band of the year' award. Along with three other bands we will be attending an awards ceremony held at well known midlands venue 'The Robin 2'. We will be asked to play in front of 4 judge panellists and a possible audience capacity of 700, tickets are available to purchase on the venues website. We believe if we was to achieve such an accomplishment and have the label of 'midlands live band of the year 2013', it would be a great way to end our year where we first began at 'The Robin 2' supporting Bruce Foxton's From The Jam. 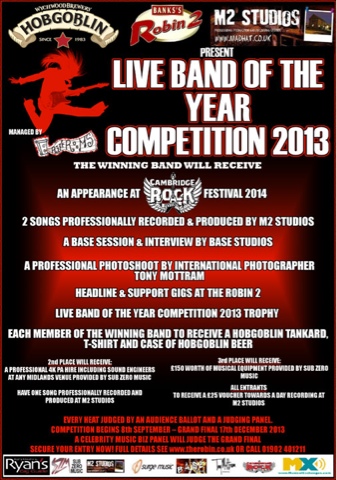